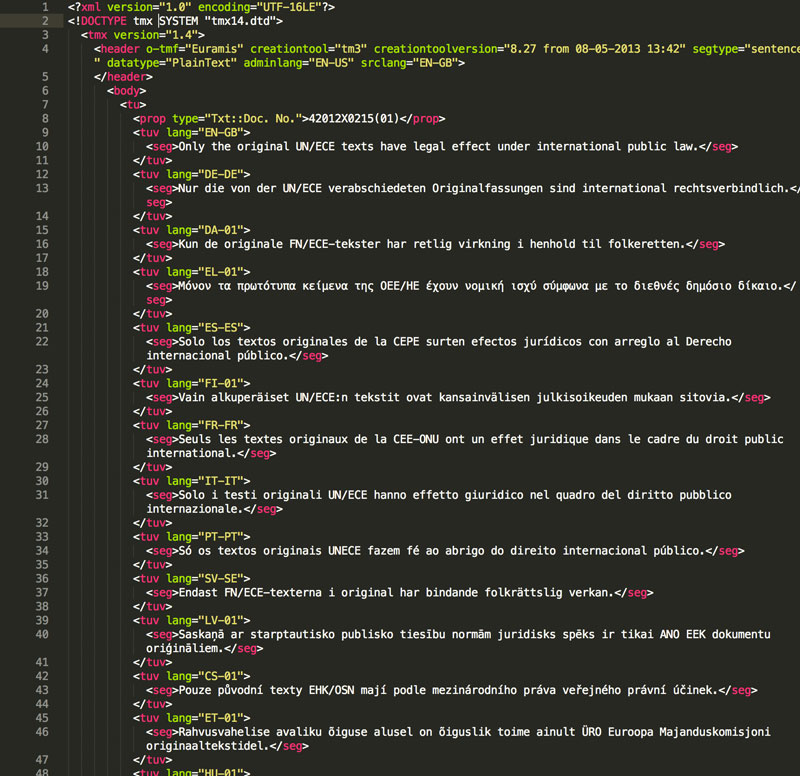 Did you know that a translation memory (TM) file is just a text file with structure? Maybe you saw the file extension (*.tmx or *.xliff) and imagined it can only be opened with special software. In reality, all you need is a standard text editor (such as TextEdit on Mac or Notepad on Windows) and you can open it up. Additionally, you don’t need a PhD or computer degree to read it or understand the structure. For the most part, a translation memory file is straightforward and functional... it is not a black box.

So what exactly is a translation memory file?

A translation memory file holds translation and linguistic data in a structured format. It’s just a text file. More specifically, it is typically an XML (Extensible Markup Language) file, which is also a text file, but with a well-defined structure which provides ways to represent complicated data structures.

What type of information does it store?

What are the typical formats of translation memory files?

The two most popular file types in the industry are XLIFF and TMX - both of which are XML files. However, translation memory can also be stored as spreadsheet files such as Excel (XLS) or even just comma separated value text files (CSV). Although XLS and CSV files tend to be smaller in size, the downside to these types is that you store less data about each translation unit (i.e. typically only the segment and language are stored.)

Why do XLIFF and TMX both use the XML format? There are a few advantages XML provides over a raw text file:

Let's break it down

What's in a translation memory file? First is the header. The header contains metadata about the file and the localization process. Let's look at an example header for each file type. As you will see, the semantic naming of XML tags makes the files human readable - even without reading the actual specification you can probably understand most of the fields.

Hover your mouse over an attribute for more details.

In an XLIFF file the metadata attributes are stored in the <file> element.

After the header comes the body. This is the section that contains the most important data - the translation units and segments. Let's look at an example body for both a TMX and XLIFF file.

Hover your mouse over an attribute for more details.

Why are translation memory files so important?

What are the differences between TMX and XLIFF?

TMX and XLIFF are both industry standard file types. Additionally, both are XML-based file types. The two formats have a lot in common, including some inline markup elements; however, each one has a slightly different structure and elements. The following are a few key differences between the two file types:

Which format is better - TMX or XLIFF?

Both TMX and XLIFF are powerful choices. They are both industry standard file formats and both are supported by the majority of translation software tools. Ultimately, whether you end up using a TMX or XLIFF file often depends on the project or tool you will be using. Additionally, sometimes a TM file might be provided to you for a particular job. Both TMX and XLIFF can get the job done well and using translation memory is 1000x better than not using translation memory (regardless of what file format you use). Many times you don't have to "choose" as you can download your translation memory from the tool you are using in either format.

However, given the choice on a new translation project, I would prefer TMX for 2 main reasons:

On the other hand, if using the TM file to reconstruct or rebuild the original file is important to you, the XLIFF format is much more powerful in this regard.

Try out this short quiz about translation memory files to check what you learned from this blog post.

#1: You can open a translation memory file (such as a TMX or XLIFF file) in a standard text editor.

#2: The term for the grouping that establishes an equivalence between a segment in one language and its translation.

#3: Which of the following is a true statement about the difference between XLIFF and TMX?

#4: TMX files can store date and time information on the translation unit level.

#5: The original purpose for the creation of the TMX and XLIFF formats was the same.

Your Score: out of 5

Question #1: Incorrect
You answered False. The correct answer is True.
Translation memory files such as TMX and XLIFF are XML files that can be opened and viewed in a standard text editor (such as TextEdit on Mac or Notepad on Windows).

Question #2: Incorrect
You answered . The correct answer is c).
A translation unit is a grouping that establishes an equivalence between a segment in one language and its translation.

Question #3: Incorrect
You answered . The correct answer is b).
XLIFF uses the <source> and <target> tags while TMX uses the <seg> tag.

Question #4: Incorrect
You answered False. The correct answer is True.
Unlike XLIFF files, TMX files can store date and time information on the translation unit level.

Thanks for reading this blog post. If you need a secure, safe and easy way to manage your TM files be sure to try out TM-Town - registration is free.

Please finish answering all of the questions.