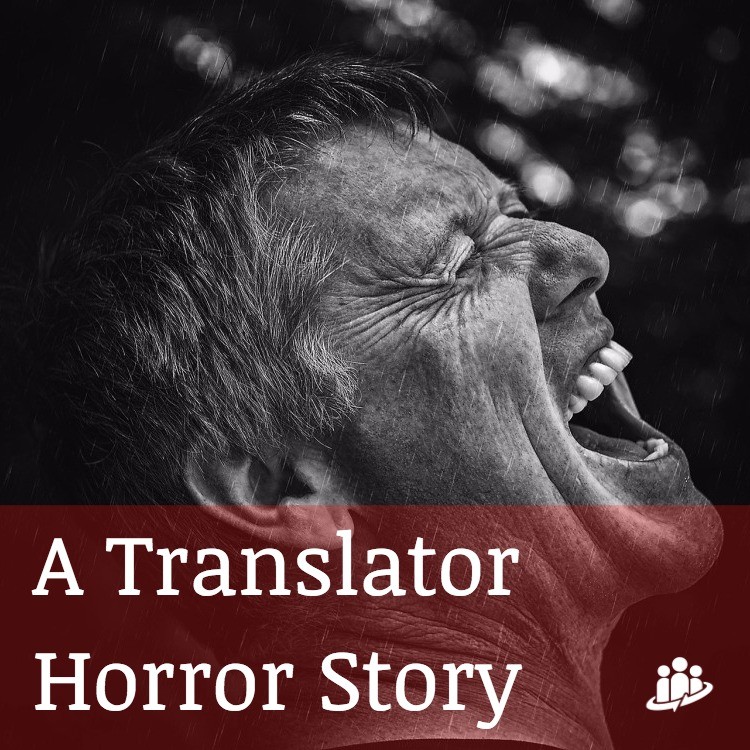 “Gather round the campfire, children. I have a story to tell...”

The old man’s knees and spine cracked as he slowly lowered himself down by the fire, the shadows grew longer as they danced higher and higher up his heavily wrinkled face.

Oooo, I don’t know about you, but I love a good scary story!

I know it’s not Halloween yet, but I heard a true translator horror story the other day that I just had to share with you so that the same thing doesn’t happen to you...

Also like you, he did all of his work on his home computer where he stored something vital to his career and livelihood...

One morning, it was business as usual.

Peter sat down in front of his computer with a cup of hot tea.

He pressed the power button and took a careful sip before placing the cup down on the desk.

Mentally going over what he needed to get done that day, he took a deep breath, ready to begin, when all of a sudden...

The blue screen of death appeared right before him!

He tried not to panic as he forced it to shut down.

Anxiously tapping his fingers on the edge of the desk while the computer tried to reboot, its fan whirling and roaring, he prayed it would come up...

You see here’s the thing.

All the work Peter had on his computer would be lost if it didn’t reboot.

But this time, there was no blue screen of death.

Just a quiet clicking sound made by the disk as it turned off, made even more audible since the fan had stopped blowing...

The screen was black, and nothing was bringing his computer back.

All was lost! What was he going to do? His priceless work was now gone, stuck on a dead computer...

While that is a terrifying story for anyone who makes their livelihood from files and resources that exist on his computer, it’s also a story that could easily happen to anyone.

And it happens all the time.

This also happened to Judith just the other day who told me she had to get another computer after hers died.

She lost glossaries she had invested time and money into, along with lots of other data.

But fortunately, that is not the end of Peter and Judith’s stories.

You see, Peter and Judith are both users of TM-Town (names changed to protect the innocent), and we were able to transform these horror stories into stories of salvation.

In Peter’s case, he had stored his most valuable assets in his TM-Town account.

All he had to do was login, and download the original files.

Everything was soon back to normal!

For Judith, the purchased glossaries she lost were also still available in her TM-Town account. So she could download everything again.

Whew! What a relief!

So, the moral of these stories?

Make sure you have your files backed up!

While there are many places and ways to back up files, let me remind you that backing up your precious work with TM-Town also adds the extra benefit of potentially being matched with a client looking for someone with your experience and expertise.

Think about the files you have on your computer right now.

If your computer suddenly crashed, would you lose something that you wouldn’t be able to get back?

If the answer is either “yes” or remotely leaning in the direction of “I’m not sure...”, head to TM-Town today to start backing up your most important files before it’s too late!

Because if you’re not backed up...

Your story may not have a happy ending like Peter and Judith’s fortunately did...

Be careful out there, and backup some work while you're here.

Nate is building TM-Town to help translators optimize their work, hone their art, and find better paying work based on their expertise. More about me